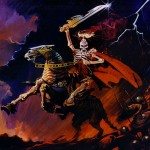 Discover a spectacular animated world where good meets evil in a sci-fi collision of high technology and mythic fantasy. When the Lightstar Crystal is split into two, the kingdom of LuminiCity is plunged into darkness and divided into two warring factions. Now, the rightful heirs to the throne must come together to battle the powerful forces of the evil Baron Dark and reunite the two halves of the crystal before their world slips into the shadows forever! 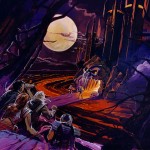 Someone has betrayed the humans and the Legion of Light is captured by Baron Dark. All fingers point to their brother Grimskull because he has the ability to mentally connect with the evil Baron Dark. 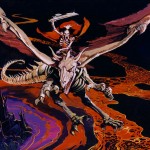 For the first time, the humans discover a way to stop a Skeleton Warrior when Talyn discovers that by removing a Warrior’s heartstone, that Warrior is instantly refleshed. Ferris leaves the Legion of Light, unable to trust himself after his transformation, but he finds enough courage to warn the Legion of Light of a surprise attack and say goodbye to Talyn. 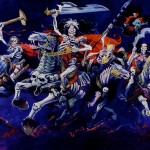 For the first time, the humans discover a way to stop a Skeleton Warrior when Talyn discovers that by removing a Grimskull and some Legion of Light commandos investigate what is believed to be Baron Dark’s new Crystal Chamber, but instead find a data crystal. While wondering why Dark wants the Legion to have the crystal so badly, Grimskull escapes an ambush of Skeleton Warriors, during which the commandos are captured. The data crystal reveals footage from when the Lightstar Crystal was split, which also reveals Joshua’s tragic mistake. The angry refugees brand Grimskull a traitor and are prepared to have him executed when Prince Lightstar steps but now Grimskull needs to find a way to rescue both the hostages and his older brother. 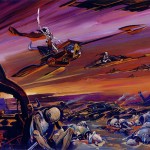 A young woman named Zara, who also happens to be an old flame of Justin Lightstar, appeals to the Legion of Light for help when Baron Dark and the Skeleton Warriors invade her village stealing food and medical supplies. The Legion agrees to help, but during the mission, Justin and Grimskull are forced to relive old hurts and past memories of the young woman they both still care for. 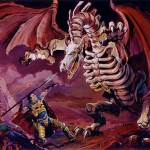 Talyn and Lightstar are worried when Grimskull suffers from constant nightmares about Baron Dark. The nightmare becomes real when he suddenly falls into a coma. The Legion of Light soon realizes that Baron Dark is, in fact, responsible for Grimskull’s state, in an attempt to control his mind and learn the hidden location of the Legion’s crystal half. 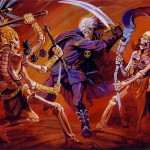 As Baron Dark continues to invade villages and enslave humans in his weapons factory, the Legion of Light decides that one of their own has to shut down the factory from inside. Guardian volunteers for the dangerous task and goes undercover. But before he does he finishes developing a weapon of his own: one designed to destroy a Skeleton Warrior’s Heartstone in order to turn them back into humans. 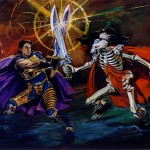 A massive dynamite explosion set off by Baron Dark traps the Legion Of Light inside a mountain. As they find their way out, Guardian retells Dr. Janov’s Futurescope stories to the Lightstar siblings. But as Guardian’s memory unfolds, a dreamscape of a life and death struggle between our heroes and the Skeleton Warriors begins to haunt the present. The Legion of Light barely makes it out alive before Grimskull befriends a wild wolf and saves Guardian from a close call with death. 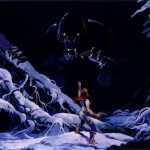 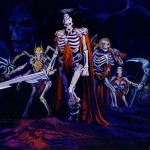 The battle rages between the Legion of Light and the Skeleton Warriors. Talyn is hit and knocked out of the sky, falling into a cave below. At the same time Baron Dark is beginning to charge his half of the Lightstar Crystal, which causes communication issues when Grimskull tries to find Talyn. 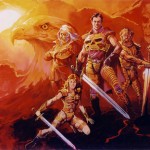 Before the final battle, Prince Lightstar returns to the moments of his childhood when his father was a king. When the Prince returns, he discovers that Baron Dark is planning to capture his father and crown himself King. 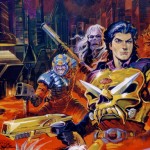 In preparation for the final battle, the heroic Legion of Light searches for the missing half of the Lightstar Crystal. Meanwhile, Ursak, Talyn and Prince Lightstar plan to free Dark’s prisoners, but their plans are almost foiled when Baron Dark releases his dragon upon them. Grimskull approaches the Cavern of Light but Baron Dark intercepts him on a treacherous bridge. As a fight ensues, Grimskull falls from the bridge into the gorge far below. Moments later Prince Lightstar, Talyn and Ursak arrive but cannot find Grimskull anywhere. Where’s Grimskull and what happens now? 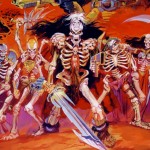 After Grimskull’s fall into the river from the bridge, the three Legion of Light heroes continue to search for their half of the Lightstar Crystal.
However, Baron Dark has taken the other half from Grimskull and now has absolute power. Can the Legion of Light stop him – even after he uses the whole crystal to activate a volcano and wreak death and destruction?